skip to main | skip to sidebar

Minds in the 21st century.


At the present rate of progress, it is almost impossible to imagine any technical feat that cannot be achieved - if it can be achieved at all - within the next few hundred years.

The Braincap is one of Arthur C. Clarkes predictions for the future.

Braincaps will directly link (bypassing ears, eyes, skin etc) the human brainwith seemingly unlimited computing power. Hooked in it will be possible to enterwhole new universes of experiences, real and imaginary.According to Clarke, braincaps will be available from around 2025.

Our world is quite different from the world of our grandparents. Common words today like ''megabytes'',''hard drive'', ''back-ups'' and ‘''Googling'' probably would have been utterly meaningless to most peopleonly a few decades ago. Likewise , few of us can imagine what the world will be like,when real history begins in the year 2100 (according to Clarke).

Clarke didn't claim to be able to see into the future (noone can do that),totally unexpected inventions or events can render predictions absurd after only a few years.Clarke himself used the statement (made in the late 1940s by the then chairman of IBM),that the world market for computers was five, to show that making predictions is a tough game.

Nevertheless, Clarke was quite good at the prediction game. And his list of predictions for beyond 2001 stands not only as an informed guess, it has also for decades been an inspiration for coming scientists and engineers.

In the list, the braincap is predicted to be available from around 2025 (and in his novel ''3001''noone can imagine humans without it ...)And surely, the enhanced cognitive powers available with the braincap will be just like magic.A transhumanist singularity now dream coming true.E.g. with the ''braincap'' people could swap thoughts in the air: Instead of blowing a kiss to yourspouse at the airport, you could blow him or her an entire farewell letter, with photos and audioclips. Etc. etc.

When neurological research comes to an understandingof all the senses, and direct inputs become possible (bypassing eyes, ears, skin etc.) people will beginthinking about linking the brain directly to computers.
According to Clarke, the result will be the metal "braincap". Anyone wearing this helmet, fitting tightly over the skull, will be able to merge in real-time with other minds over the (inter)net.Brain caps, Clarke explained, will also eliminate menial tasks: "I think it's imminent," he said,"For some simple things like switching lights on, or the air conditioner, or starting your car."

There is more:
a) The Braincap will be a boon to doctors, who can now experience their patients' symptoms (suitable attenuated).
b) It revolutionises the legal profession, as deliberate lying, with the right settings on the braincap, will thenbe impossible.
c) In education, the braincap will do away with thetraditional school system: In Clarkes ''3001: the FinalOdyssey'' astronaut Frank Poole (sent into the deepfreeze of space by the homicidal HAL) is revived and given a crash course in human history bya brain cap, which pumps information directly into his cerebral cortex. I.e. a braincap is fitted onto Pooles skull and the history and customs of humanityis downloaded into his brain.
d) In psychology, braincaps serves as an early-warning system for psychosis. Mental deviancies are treated immediately. As a result, no one in the fourth millennia starts wars, acts violently or has bad marriages. Sure, marriages have by then taken the eminentlyreasonable form of fifteen- year renewable contracts. Still, braincaps can pick up on unfortunate thoughtpatterns and automatically send people to couples therapy.

The braincap could indeed be the ultimate virus scanner. On constant lookout for mind viruses. And obviously, there must be a privacy issue or two with this scenario!?It gets worse though. Surely, people will want all/some of these biotech enhancements,to alter their personalities, boost intelligence, and live longer healthier livesHowever, as braincaps becomes more and more integrated with human brainsbuggy braincap software might be among the worst mental diseases of the future?
BTW. Who will be doing Quality Assurance on braincap software?And what kind of security will there be on links between braincaps andthe skynet braincaps are hooked in to?

Indeed, with a virus scanner, working inside the braincap, on the lookout for dangerousthought patterns and behaviours, future systems might conclude that humans runningaround out there IRL is just way to dangerous for their own good?Perhaps, it will be concluded that is much better to have the brains run Avatars,using telepresence. With human brains stored away in some safe environment?
Or perhaps, braincap enhanced life in the 21st century will only be little smarter,but just as dangerous as it has always been? 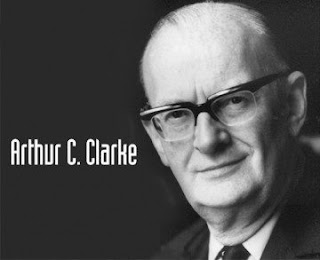 Arthur C Clarke (1917 - 2008).
Is acknowledged as one of the greatest science fiction writers ofall time. His writing spans six decades and more than 100 books. In 1945 he was the first to propose using a network of satellitesin geo-synchronos orbit for telecommunication purposes. A vision which became a reality in the 1960s.

His writing has inspired many. Among them Tim Burners-Lee, who was inspired by ''Dial F for Frankenstein'', when he(and others) invented the world wide web. --- As a teenager, Berners-Lee read science fiction voraciouslyand was fascinated with Clarke's short story ''Dial F for Frankenstein'', in which computers are networkedtogether to form a living, breathing human brain
---
For 2025 Clarke predicted the braincap. That gives the brain direct access to seemingly unlimited computing power. Wearing this close-fitting helmet also makes it possible toenter a whole new universe of experiences, real and imaginary.According to Clarke: One factor that might delay its generaladoption is that the wearer would probably have to be completelybald to use the tightly fitting helmet.So wig-making could become really big business in a few decades..Whatever way they are eventually designed, advances in neurological understanding (to make direct links to the brain, by-passing eyes,ears etc.) and advances in computer technology should make braincaps a reality by 2025.
Posted by Simon Laub at 3:23 PM No comments:

At the Long Now site one finds a wonderful collection of predictions about the future.Super AI computers by 2029 - or not? Voice recognition software that index all your conversations by 2020?AI computer virus by 2040? Bio terror by 2020? Immortal men and mice by 2040? ET phones home by 2050?

My favourite bets from the Long Now list:
- By 2029 no computer - or "machine intelligence" - will have passed the Turing Test.
- By 2050 no synthetic computer - or "machine intelligence" - will have become truly self-aware (ie. will become conscious). Prediction by Nova Spivack. My Notes: Go - Ray Kurzweil ....
- In 2108, an independent, sentient artificial intelligence will exist as a corporation, both providing its services as well as making all financial and strategic decisions.
- By 2030, commercial passengers will routinely fly in pilotless planes.
- That by 2020 a wearable device will be available that will use voice recognition capability and high-volume storage to monitor and index conversations you have or conversations which occur in your vicinity for later searching as supplemental memory. Prediction by Gregory W. Webster. My Notes: Thats a nice little Google project for you ....
- By the year 2040, AI will appear on computer viruses that will communicate with each other using a universal Internet language and will be programmed to fuse together and mutate into Computer Organs that will later be controlled by powerful search engines (Systems) diffused through out the Internet.
- On or before 8 June 2030, there will exist a computer language or programming system in which the prototypical first program, traditionally called "Hello, world!", will have an executable file whose size exceeds 1 gigabyte. My Notes: Horrible, but probably true....
- By 2020, bioterror or bioerror will lead to one million casualties in a single event.
- By 2040, at least 40% of Americans making it to age 65 will live to age 100.
- Immortal mice by 2015.
- After 2002, Evidence of extraterrestrial intelligence within the solar system will be confirmed before evidence from several light-years away.
- By 2050, we will receive intelligent signals from outside our solar system, Prediction by Paul Hawken.
- Technocrat will become a political party by 2020, Prediction by Steve Hockenyos.
- By 2050 the tallest free or non-free standing structure in the world will reach over 10 kilometers in height. My Notes: Makes little sense. But then again. The Burj Dubai doesn't make much sense either.
- No human will set his or her foot on Mars and return safely to earth before 2050. My Notes: Hopefully not so! Hopefully humans will go to Mars much sooner! Gonna be a tough ride though !
Posted by Simon Laub at 2:37 PM No comments: