skip to main | skip to sidebar

Minds in the 21st century.


At the present rate of progress, it is almost impossible to imagine any technical feat that cannot be achieved - if it can be achieved at all - within the next few hundred years.

In the very nick of time I have tried to put some order to my 2013 experiences.

One of the best experiences in 2013 was the ''Constructing The World'' workshop (author, David Chalmers, meets critics) in Bonn.

The result was a homepage with some Impressions and Links from the workshop.

The result can be seen here.

A Youtube video with similar material can be seen here.
Posted by Simon Laub at 11:50 AM No comments:

1.2 mill years ago there were only 18.500 people ... (was: population size in the ancient ancestors of Homo sapiens)

population size in the ancient ancestors of Homo sapiens:

Surely, finding a wormhole in time that leads from 2011 Maine to September 9, 1958
in your local diner would be a bit surprising...
Especially, when you realize that you can visit the past for as long as you like - days, months, even years, but when you return to the present it's always exactly two minutes later.

Certainly, the hero of this epic King novel, Jake Epping, a divorced high schoolteacher from Maine, is surprised. Perhaps even more so, when the dying restaturant owner then gives him the task of
correcting american history, by preventing the assassination of JFK.
Arguing that stopping the assassination would make the Vietnam war and other horrors after that impossible.
And off we are, back to 1958. A world without GPS and mobile phones, cigarette smoke-clouds everywhere, the cold war, idle housewives that go shopping while their men are busy at work and with racism lurking around every corner.
The fifties in America becomes intensely real. Indeed, the King time machine really works.

But, and this is the truly great part, time doesn't especially like to be changed. It disturbs the "harmonies" of the universe.
The machinery of time has a certain logic to it. So, if you drive to Dallas to kill Lee Harvey Oswald on the 21st, chances are that you will end up with a flat tire and get nowhere near Dallas...
Kings description of this is really masterly done and makes the book a real cliffhanger, all 880 pages of it actually...

Another twist is added when our hero falls in love with the lovely Sadie, and becomes torn between his duty to stop the assassination of Kennedy and his desire to abandon the mission to spend the rest of his life with her.
Juggling a life in an apartment next to Lee Harvey Oswald and Oswald's wife Marina (he must observe Lee to make sure that he is the real killer), and a girlfriend that doesn't understand his taste in music (Rolling Stones songs from 10 years later) is probably "normal" stuff for timetravellers -
But in Kings version you can actually feel the fabric of time being twisted and turned.
Life is really just performed upon a stage that might crack open at any time to reveal another truth.
Again, masterly done.

The upcoming TV mini series and the movie (obviously, there will eventually be a movie) are certainly going to be hits.
The harmonies of time dictates it.


On June 4 1996, the European Space Agency test-launched the Ariane 5 rocket. A bug in the control software, written in the programming language Ada, caused the rocket to self-destruct 37 seconds after blast-off.

Its conclusion: the explosion was the result of a software error -- possibly the costliest in history (at least in dollar terms, since earlier cases have caused loss of life).

Particularly vexing is the realization that the error came from a piece of the software that was not needed during the crash. It has to do with the Inertial Reference System, for which we will keep the acronym SRI used in the report, if only to avoid the unpleasant connotation that the reverse acronym could evoke for US readers. Before lift-off certain computations are performed to align the SRI. Normally they should be stopped at -9 seconds, but in the unlikely event of a hold in the countdown resetting the SRI could, at least in earlier versions of Ariane, take several hours; so the computation continues for 50 seconds after the start of flight mode -- well into the flight period. After takeoff, of course, this computation is useless; but in the Ariane 5 flight it caused an exception, which was not caught and -- boom.

The exception was due to a floating-point error: a conversion from a 64-bit integer to a 16-bit signed integer, which should only have been applied to a number less than 2^15, was erroneously applied to a greater number, representing the "horizontal bias" of the flight. There was no explicit exception handler to catch the exception, so it followed the usual fate of uncaught exceptions and crashed the entire software, hence the on-board computers, hence the mission.


A computer glitch nearly pushed investment firm Knight Capital into bankruptcy. The firm lost half a billion dollars in half an hour when a software error allowed computers to buy and sell millions of shares with no human oversight. The company's stock prices plunged by about 75 per cent in two days.

On 1 August 2012, an installation problem in Knight Capital’s software blasted out a gusher of erroneous stock trade orders. After trading out of all those errors, Knight suffered a pre-tax loss of about US $440m. That’s an Olympic-sized loss that happened almost as fast as a star athlete’s stumble in London.

3. The north-east US power outage back in 2003 was caused by software glitch.

The 2003 North America blackout, at the time the second most widespread power outage in history, was the result of a local blackout that went undetected by General Electric software then cascaded out of control.

On August 14, 2003, shortly after 2 P.M. Eastern Daylight Time, a high-voltage power line in northern Ohio brushed against some overgrown trees and shut down—a fault, as it's known in the power industry. The line had softened under the heat of the high current coursing through it. Normally, the problem would have tripped an alarm in the control room of FirstEnergy Corporation, an Ohio-based utility company, but the alarm system failed.

Over the next hour and a half, as system operators tried to understand what was happening, three other lines sagged into trees and switched off, forcing other power lines to shoulder an extra burden. Overtaxed, they cut out by 4:05 P.M., tripping a cascade of failures throughout southeastern Canada and eight northeastern states.

All told, 50 million people lost power for up to two days in the biggest blackout in North American history. The event contributed to at least 11 deaths and cost an estimated $6 billion.

Posted by Simon Laub at 2:01 PM No comments: 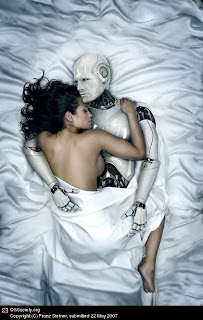 When I posted on Posterous, I often included this picture... Will miss the happy days on Posterous ... :-)
Posted by Simon Laub at 2:16 PM No comments: 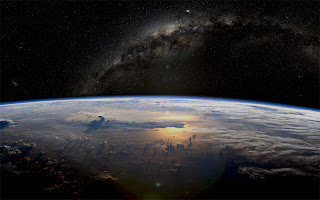 Rather sad. But sometimes blogs close... Posterous is shutting down April 30th... Well, well Time to see things from above...
Posted by Simon Laub at 2:14 PM No comments:

Extracting Keywords for a WebSite is big business (E.g. see Google AdWords).
Still, on my Website I have just entered keywords, and hoped that people would be able to locate my texts, in their favorite search engine...

Obviously, there is a lot more that can be done.

I have recently tried to verify that my (manually entered) keywords are actually accurately.
Used a machine to verify, and on all the pages I tried this on, my own manually entered keywords seemed to be rather accurate...
So far, so good.

I then handed WordItOut the complete texts from a number of selected pages from my Website.
Keywords were calculated and graphical presentations made, beautiful stuff... 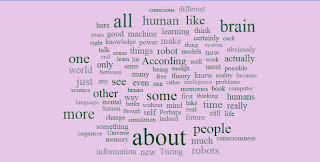 Posted by Simon Laub at 8:25 AM No comments:

Just about any night in Inglewood, Los Angeles.

Close to Hollywood, there tend to be a lot of cameras around: Certainly, as this uploader so funnily says, ''Here we go again....this guy just don't wanna give up....''
Pure Keystone Cops: And when the Cavalry comes driving by you scream ''Inglewood'': The suspect flashed gang hand signs out of the driver’s side window during he pursuit. ”The gang signs were consistent with his being a gang member,” Hand said.
The whole chase on Tv - Synchronized split screen.
More chase footage.

Inglewood Police go after the man in a vehicle, following him as they go by the observer's home. This incident occurred on West Century Boulevard, in Inglewood, California, so we now know where uploader Jason Lee lives.

In the description, he lets us know that the motorist was eventually caught by police, at the intersection of Arbor Vitae and Oak Street.

Officers waited until a pattern emerged in the suspect’s course, then laid down spike strips again at Century Boulevard and Inglewood Avenue at about 1 a.m., Hand said, adding that the car came to a stop at Arbor Vitae and Oak Streets in Inglewood and the boy gave up without incident.

The suspect was arrested on suspicion of car theft, assault with a deadly weapon on a police officer for running into the patrol car, and felony evading, Hand said. His name was not released because of his age.

Another pursuit in Inglewood: lapd-pursuit-ends-in-inglewood.
Posted by Simon Laub at 10:19 AM No comments: